McDonald’s Pakistan has declared that it will no longer serve medium and big fries, instead opting for standard fries with altered rates for medium and large meals.

The company reported a “supply chain issue,” but the hungry Pakistanis were not placated.

The news that large and medium fries will no longer be offered sparked outrage on social media among Pakistanis who prefer oversized servings of unhealthy vegetables.

Pakistanis took over twitter by storm to show their grief. 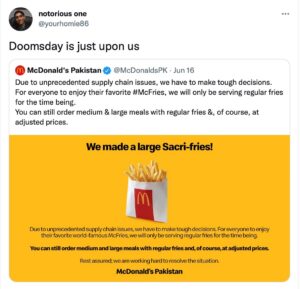 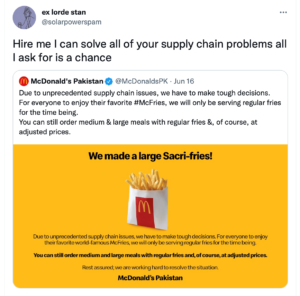 Overall, while the McDonald’s french fry conundrum may appear to be a little first-world issue, it exacerbates people’s problems, particularly in light of the country’s recent economic crisis. At a time when Pakistanis are being asked to reduce their tea intake and give up pet food for their four-legged companions (though this has since been reversed), something as simple as giving up a huge helping of one’s favourite french fries can be the final straw.